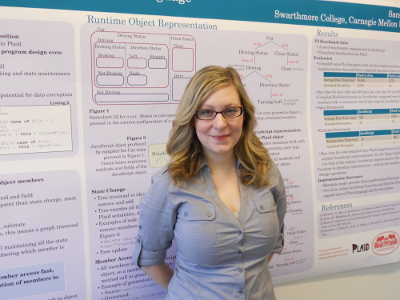 Sarah was awarded first place for her work on an implementation of the Plaid programming language, a language with explicit support for expressing state and state change. Efficient language compilation usually relies on any given object to have a stable set of members, but allowing state change means allowing members to change at runtime. Sarah wrote a code generator for Plaid that implements that functionality. To produce efficient code, she developed a novel representation of object state. Her representation facilitates member addition and removal, while keeping method calls and field reads fast.

Sarah conducted her research with Professor Jonathan Aldrich at Carnegie Mellon University during the summer of 2011. They continue to collaborate on this project. In addition, Sarah is using this work as the basis of her CS honors thesis.

Sarah will go on to compete in the ACM Student Research Competition Grand Finals in 2012.